In 2020 the Royal Children’s Hospital will celebrate its 150th anniversary, an incredible milestone of providing world leading healthcare to the some of Victoria’s sickest kids. We heard from the Foundation’s CEO, Sue Hunt who shared the original vision of the two doctors responsible for initiating the hospital which was to “…help sick and injured children at no cost to families”, a vision that continues today.

As part of the 150th celebrations the RCH Foundation is presenting the Me & Uoo Uoo Art Trail to be held across Melbourne and, thanks to support of Frank Costa AO, across Geelong as well in partnership with the Barwon Health Foundation. The Uoo Uoo sculptures will be decorated by well-known and emerging artists and will be placed in various locations around Geelong and Melbourne. The original Uoo Uoo has been created by a Melbourne artist Alexander Knox, its shape being a combination of a wombat and a dugong.

Like many others Terry and I both have special affiliations with the RCH. Terry’s great friends, Grant and Margie Sheldon tragically lost their son, Kyle in February 2016 at the age of 26 to an aggressive bowel cancer. In his memory and as a legacy to Kyle, Grant and Margie set up the Kyle Sheldon Memorial Fund which is auspices through the RCH Foundation. Kyle spent the first two years of his life at the Royal Children’s to treat his short bowel condition and despite the challenges he faced he went on to live a life full of courage and determination, a spirit that lives on at the family’s Annual Memorial Golf Day which Wealth Built Right takes great pleasure in supporting each year.

My gorgeous and, dare I say it, at times cheeky five-year-old daughter, Mia is my connection to this amazing hospital. At an early age Mia was diagnosed with life-threatening food allergies. At the time I had little to no knowledge of what the term ‘anaphylaxis’ meant and the massive impact this would have on our lives. I think it’s fair to say that ‘allergy mums’ do better research than the FBI when it comes to finding strategies to manage this condition that has, at this point, no cure. My research led me to a treatment being offered overseas called Oral Immunotherapy (OIT) which basically attempts to retrain the immune system’s response to the allergen. Having done significant ‘due diligence’ on this treatment I was beyond grateful to being given the opportunity for Mia to participate in a research trial through the RCH and the Murdoch Children’s Research Institute. While the treatment in the trial hasn’t been all smooth sailing so far, Mia’s resilience is amazing and she’s been an absolute little champion to persist with the ups and downs. What this opportunity and treatment does offer is hope something, until now, we didn’t have! I’m confident the research being done by the expert team at MCRI will be life changing for allergy suffers and their families.

So, this brings me back to the Me & Uoo Uoo  Art Trail. Because of the support WBR has already given the RCH Foundation we’ve been invited to partner with them as a Sculpture Sponsor and we’re delighted to be in a position to support this initiative and our local Geelong community via its partnership with the Barwon Health Foundation.

It’s a privilege to play a small, but very important part in the future of paediatric healthcare for our state and we can’t wait to share our Uoo Uoo with you!

Connect with Natalie on LinkedIn 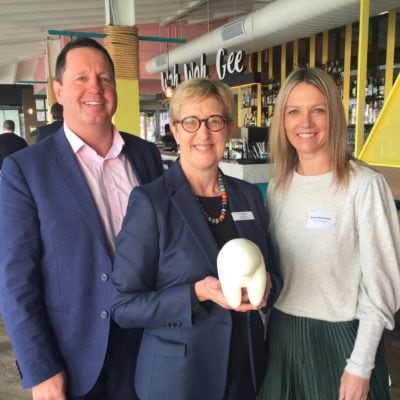