Pivoting is the latest buzz word, mainly thanks to the changing landscape COVID-19 has created for us but pivoting is something that’s been around since business began. When things get tough, the business climate changes or circumstances beyond your control force change, it’s time to pivot and this is a wonderful story of exactly that.

We began working with Henry and Julia several years ago. At the time Henry operated a successful sheep farm on the stunningly beautiful Monaro Plains in the Snowy Mountains region & Julia was doing very well as a Lawyer in nearby Cooma. Life was good!

Then due to circumstances outside Henry and Julia’s control they were required to make some life changing decisions culminating in the sale of their farm. At the time Henry was in his comfort zone and had evolved into a very good farmer after fifteen years learning on the job. Henry and Julia’s future was uncertain, and Henry confided that at the time he was terrified as he had no idea what lay ahead.

We changed direction with our planning process and worked with Henry and Julia to gain clarity about what the future could look like. This involved relocating to Canberra, purchasing a gorgeous home and enrolling their two children into private schools. Julia successfully applied for a new role with a Canberra law firm and slotted in well. As a mature age student Henry enrolled to study a Master of Environmental Management & Development at the Crawford School of Public Policy at the Australian National University which was a 2-year course.

Both Julia and Henry have made significant personal sacrifices over the past 3 years but today the world is their oyster. Henry completed his studies and was selected as the winner of the Tiri Tiri Prize, for the most outstanding Masters degree student achieving the highest academic excellence in the degree which was a phenomenal achievement. He has since obtained employment with the Department of Infrastructure’s Strategic Policy branch and is heavily involved in developing a national water grid to support the agricultural industry around the nation.

Meanwhile Julia’s legal expertise became noticed and she was recently head hunted by one of Canberra’s leading law firms to be Special Counsel to head up their Estate Planning division.

Despite busy lives Henry and Julia and their teenage children have immersed themselves into the Canberra lifestyle and are actively involved in a number of sports including rowing, golf and the odd ski trip to Thredbo.

Henry and Julia expressed that we played a pivotal role in their pivoting, keeping them grounded and on track when things seemed like they were spinning out of control. In particular they appreciated our long term and wider perspective of planning for the future which kept their stress levels down during a time of significant change. Henry and Julia’s actions are a fine testament to one of Wealth Built Right’s value of Courage and we are very proud of the outcomes they have achieved. 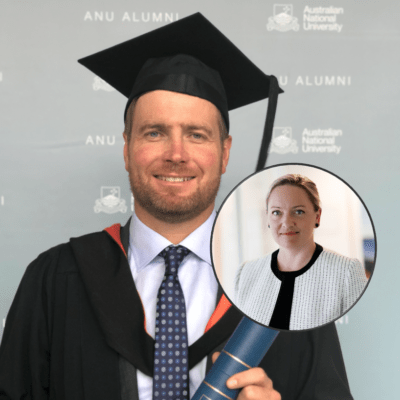